Our competitive edge lies in that we have a wide variety of popular designs to choose from that caters to a wide demographic, not excluding any age range. The younger population might be attracted to our fashionable marble series, cutesy unicorn designs, or the kpop group series. Older age group can choose retro themes, browse the simpler gradient colour series, or send in their family photos.

As a start-up, we seek to learn and grow together as a team so if there is any feedback or suggestion, do kindly email us at thevioletmarlin gmail. We also welcome idea of new series or themes that are popular as we are expanding our archived series weekly. Enjoy dressing up your phone covers! Le Marlin Violet provides a wide range of mobile accessories to address consumers' need of protecting and dressing their precious phones.

We also sell stainless steel jewelry as well as other miscellaneous products. Subscribe To UsSign up to receive our latest news, tips, and special offers! NameEmail Address Contact Us thevioletmarlin gmail. Opening the LG X Venture is also required when you desire to remove the battery or when ever you wish to dust off the inside of your phone. We will first of all see how to find the point that allows to open the hull of LG X Venture. We will observe in a second step how to open the hull of LG X Venture. To achieve this, we advise you to refer to the operating instructions of your LG X Venture.

In case you do not have the user manual of your LG X Venture, you can actually find it on the internet. Many of the time, the technique of removing the hull is to slide the hull or to unclip it. However, we advise you to be vigilant when ever doing this step, in order not to affect your LG X Venture. After getting found the opening point of the hull, you will finally be able to open your LG X Venture.

To achieve this slide or boot the rear part of the shell in accordance to the model of your LG X Venture. When it can be done, half of the hull is removed. If you want to remove the front part of the hull of the mobile phone, understand that it can be a little more complex.

Do not enable dust or moisture to get inside the mobile phone. As with the last-gen MX, the back cover is removable, except it doesn't require that special tool we mentioned earlier. In the current model, unfortunately, removing the backing requires nothing short of an act of Congress. To do this, take either your fingernail or the funky guitar-pick-like tool from the box and, beginning at the micro-USB port on the bottom edge, work your way around the edges until the cover pops off. Your reward for this achievement is access to the micro-SIM tray There is no user-accessible microSD slot.

The 1,mAh battery an improvement over the original's 1,mAh capacity gives the misleading impression that it can be lifted out of its comfortable bed. In fact, though, this isn't possible without thoroughly tearing down the device. This inconvenience may be minor to some, but as you'll see later in the review, it can become a source of irritation for frequent travelers or users who demand as much power as possible.

The MX 4-core's measurements of The edges are straight, with a very slight taper on the back that flatten toward the middle. This reviewer was able to handle the device well enough with his average-sized hands, though the phone's glossy finish makes the 4-core a little slick-feeling. We found ourselves intrigued by the mystery surrounding the quad-core CPU. Most spec sheets and third-party diagnostic apps confirm that the silicon embedded within the latest MX is a rebranded 1.

The mystery, however, is that despite the mounting evidence, Meizu won't specify exactly what chip is used. We were simply told that it's named the MX5Q, though a simple Google search matched this chip with the Exynos. Even some of the company's marketing materials confirm that this mysterious SoC is a 32nm Cortex A9 wafer clocked at 1.

Lastly, it contains radios for Bluetooth 2. If you've perused the spec sheet, you shouldn't expect the 4-core to have a top-notch display. Still, it's actually a little better than the resolution would suggest. It can't really compete with the Retina display despite having the same resolution on a larger screen or the HTC One X's SLCD 2 panel -- its whites aren't as bright, and its blacks aren't quite as dark.

However, it does offer a wide color range and we liked the amount of detail retained in images, though some high-res videos showed slightly oversaturated colors. As the non-PenTile RGB screen delivers a pixel density of roughly ppi, we had a difficult time picking out jagged lines or any form of pixelation.

The viewing angles are so wide that the display remains usable even if you're viewing it nearly edge-on. We could read almost everything on the screen in direct sunlight as long as the display was cranked up to full brightness. The only exception was when we tried viewing detailed images or videos. After booting up the device for the first time, you'll find that Meizu's Flyme OS is not your average Android skin. 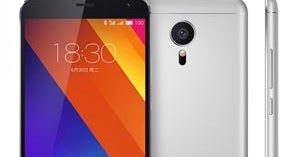 If you think Samsung and HTC have gone too far in their respective Android user interfaces , prepare to shift rather uncomfortably in your chair for the next few paragraphs -- it's going to be a bumpy ride. Indeed, Meizu's homebrewed skin may be a stranger to the Western hemisphere, but it still emits an aura of familiarity despite the fact that it bears virtually no trace of Google's stock UI. That's because after just a few minutes of playing with the device, we were reminded more of iOS than Android. As we mentioned earlier, this comes as no surprise; we imagine Meizu has been on speed dial in Apple's legal office for several years.

Flyme OS, which we've seen on previous Meizu devices, is an interesting mash-up of the two popular operating systems.

At first, the lock screen makes it seem like Flyme won't be a drastic departure from stock Android. Date and time are at the top just underneath the notification bar and above the music controls only displayed during playback, of course , while three quick-access icons sit at the bottom of the screen. When sliding the icons up, Flyme adds in a clever animation that makes it appear as though the destination screen is being dragged up along with the icon itself.

The home panel is your typical 4 x 4 grid with the app dock hanging out at the bottom and a larger-than-usual status bar up top.


The bar, which is twice as thick as the standard Android option, displays the date and time on the left, with all notifications pushed to the right. Meizu also threw in the remaining battery capacity on the lower right portion of the bar. As a side note, the status bar shrinks down to the normal size when you enter an application. The app dock is also unique.

Up to five icons can reside within it, though only four can be switched around. The one app that isn't going anywhere is Meizu's very own web browser, which we'll return to in just a moment. Perhaps the most jarring change in the Flyme setup, however, is the omission of an app tray. What's more, you can have up to 12 pages to place your apps and widgets, and each one is created in exactly the same fashion dragging the app as far to the right as you can until a new panel appears.

Having so many pages is frustrating, though, because the OS doesn't have a way of jumping to the panel of your choice, which means you have no choice but to swipe from page to page. What if you just can't live without the app tray? Here's an easy solution: download a launcher that still supports one and your problem becomes a thing of the past.

We installed Apex and were able to bring up a very familiar menu, complete with apps and widgets. By the way, multitasking also leans closer to Apple's approach: long-pressing the menu button brings up a horizontal bar with three layers. The middle layer is the most prominent, displaying four app icons at a time. To find more recent apps, just slide your finger to the left and you're treated to another set of four.

Above these icons sits a button that enables you to close all of your open apps in one fell swoop. If you prefer, you can still get rid of them one at a time by long-pressing icons until a large X appears below, after which you just drag and drop it. The bottom layer is reserved for a basic music player, which unfortunately doesn't appear to offer any support for third-party apps.

The notification bar is also slightly different than what you'd typically expect. The date and a "clear all" button hang out just above these.

However, the most interesting part is over on the right: a drop-down menu allowing you to switch between WiFi networks and the type of mobile network you can choose between 3G-only, GSM-only or auto. Notifications can still be swiped away one at a time if necessary. Lastly, you can only drag the bar itself down as far as the bottom-most notification; in other words, if you don't have any to look at, the bar will only go down far enough to expose the quick controls found at the top.

This may feel jarring to some, but we actually appreciated that the notification drop-down didn't unnecessarily obscure whatever it was we were looking at. Despite its Apple-inspired layout, the device runs Ice Cream Sandwich -- version 4. This means you still have access to the Play Store and whatever widgets you want. But without an app tray, where can you find the widgets? They're in the settings menu, under "customize" -- not necessarily the first place you'd think to look, but it's there nonetheless. Fortunately, unlike last year's MX, you can place the same widget in more than one spot.

Speaking of ICS, there are a few features missing from Flyme.